Posted 2 years ago by Danielle Ross

In my previous blog, I discussed some useful tips on reducing visual stress and distortion. But it occurred to me, often people don't know that the way they see is any different to anyone else. We only know our own visual experience, right?

So, here I will discuss some common forms of visual distortion. However, because the eyes and the brain are so complex, this isn't all encompassing, and if you have specific concerns about your eyesight or eye health, we strongly recommend professional advice. You can book an appointment here.

Because the sudden onset of flickering, flashing or disturbed vision can be the warning signs of something much more serious, such as a retinal stroke or detachment, it is important to seek immediate attention from your optometrist. 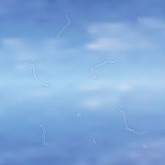 However, as there are no pain receptors inside the eyes, visual disturbances can often be the only warnings signs of something more serious, such as a retinal detachment. If you notice the following, we suggest you seek urgent attention from your optometrist:

There is another group of visual distortions; the ones that are typically reported by either kids having difficulties learning at school, or those who are suffering visual symptoms after a concussion, whiplash or head trauma.

There are a number of reasons why someone may see text in this way. Yes, it can be the hallmark symptom of a visual dyslexia or Irlen Syndrome. But there are also a number of visual conditions that can also cause these symptoms. These visual conditions are often related to how the two eyes work together as a team, a skill known as binocular vision.

The most effective way to tackle any visual distortion is to find out why it is happening and what is causing it. A specialist optometrist needs to assess first that the eyesight is normal and that the two eyes are working well together as a team. They will also assess how well the vision part of the brain interprets the visual signals (known as visual information processing or visual perception).

If the eyes and vision part of the brain are not the cause for the visual distortion, a specialist optometrist will often then refer you to another specialist, such as an educational psychologist, to see if the cause might be a type of learning difference, such as dyslexia.

With any vision symptoms, however, the first port of call should always be an optometrist, and specifically one who specialises in binocular vision. We recommend our principal optometrist, Danielle Ross, and you can book an appointment here.